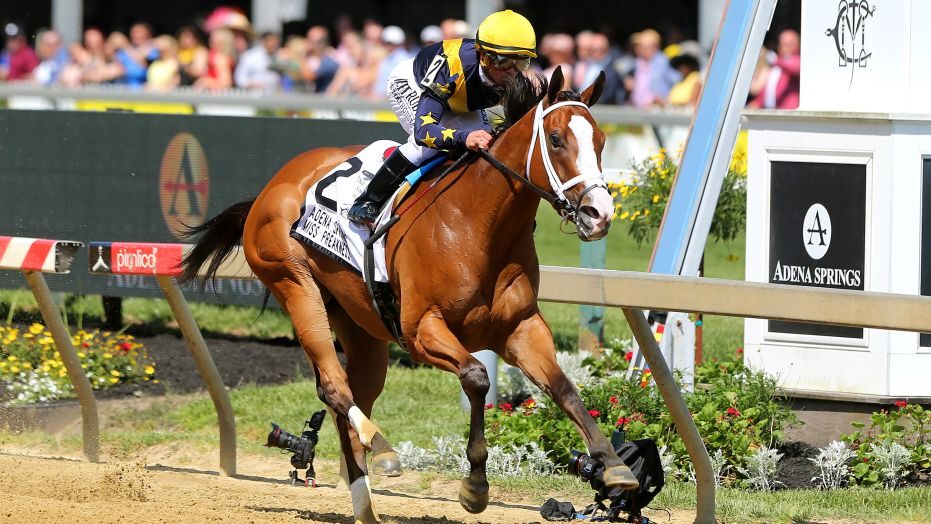 Forget not getting the distance. It looked like Bricks and Mortar could have used a bit more ground in both winning Saturday’s $4 million Breeders’ Cup Turf and solidifying his case for Horse of the Year.

Undefeated in six starts this season, the 5yo son of Giant’s Causeway found a seam in the stretch, then rallied from mid-pack to nip United at the wire of the 12-furlong Turf, his first race beyond 1 1/4 miles.

Trainer Chad Brown weighed going in this spot or shortening up in the Breeders’ Cup Mile. In this case, the sporting decision paid off, with Bricks and Mortar adding to victories in the Pegasus World Cup Turf and Arlington Million, among others.

Vino Rosso shipped from the east, but he sported an earlier win over this course and at the distance of the $6 million Breeders’ Cup Classic. The 4yo colt made the most of that experience Saturday when returning to Santa Anita Park to make his career finale a winning one.

The breakdown of Mongolian Groom during the stretch run of the US$6 million Classic sucked the air out of the vast Santa Anita grandstand on Saturday. The 4-year-old son of Hightail’s sad demise also turned up the heat on Santa Anita management, occurring as it did right in front of the grandstand on one of horse racing’s biggest days.

Under jockey Irad Ortiz Jr., the Todd Pletcher-trained son of Curlin pulled alongside favoured McKinzie at the top of the stretch, then proceeded to cross under the wire in a final time of 2:02.80.

Vino Rosso had shipped west earlier this season to win the Gold Cup at Santa Anita (G1). In his last start, he beat the 3-year-old Code of Honor to the wire only to be disqualified.

The 3yo filly named after Trump’s ill-fated 2017 tweet overcame a rail draw Saturday, biding her time well behind pace-setting Danuska’s My Girl and Heavenhasmynikki. Rosario guided her outside into the turn, and by the top of the stretch, the daughter of Into Mischief had hit the front winning the US$1 million Breeders’ Cup Filly & Mare Sprint beating Bellafina. Dawn the Destroyer came in third.

Stormy Liberal didn’t get his Breeders’ Cup Turf Sprint three-peat, stablemate Belvoir Bay did capture the US$1 million Turf Sprint trophy in the feature race at Santa Anita Park for her trainer.

Having found the lead early under jockey Javier Castellano, she finished up in a course record 54.83 for five furlongs after opening up in fractions of 21.47 and 43.43 with this her first start since June.

Spun to Run trained by Carlos Guerrero created quite an upset when he beat popular Omaha Beach. Irad Ortiz Jr. pushed his charge to take the lead, chased by the Korean entry Blue Chipper, who finished third.

Iridessa made Joseph O’Brien the youngest man to win a championship event as both a jockey and now a trainer. The Ruler Of The World mare beat Southern California stalwart Vasilika in the final strides of the US$2 million race.

Defending race winner Sistercharlie landed a well-fought third. The mare entered on a six-race winning streak, all in Group One company, but jockey John Velazquez said she'd prefer turf not quite as firm as at Santa Anita Park.

Mitole chased down Shancelot — who actually went off as the favourite over older rival Mitole — while finishing six furlongs in 1:09.

The victory capped a nearly perfect season that also enshrined Mitole as the second horse to win the Gr.1 Met Mile and Sprint in the same year following Gulch in 1988.

As Uni and Got Stormy began ranging up through the turn of Saturday’s $2 million Breeders’ Cup Mile, it became apparent a filly or mare was going to beat the boys. But which one?

Uni, whose connections paid to supplement her to the race, flew by outside her rival in the stretch, with the Chad Brown-trained daughter of More Than Ready completing eight furlongs in 1:32.45.

Owner Jeff Bloom confirmed reports that the then Breeders’ Cup Distaff favourite Midnight Bisou would be returning to training in 2020. However, Blue Prize, stepped up to upset well-laid plans but then Midnight Bisou will have the opportunity to go once again in 2020.

The powerful winner of the Gr.2 US$200000 Pocahontas Stakes, Serengeti Empress landed an excellent third.